A good number of people have over the years shown some confusion about the identity of the tribal members at the Grand Ronde tribe. Many natives and non-natives still do not understand the impact of the removal of the people from their lands, their assimilation to American society, and the somewhat unique situation of being terminated in 1954.  It is not that termination is unique to Grand Ronde, because 109 tribes were terminated nationally, but there are few other reservations that can claim 27 to 35 tribes and be terminated, leaving many people without federal status and related to so many tribes in western Oregon. The complexity comes when thinking about what we have to do to help people relearn their history and culture. History is difficult because, even at this late date, it is not been fully parsed out and we are still uncovering events and contexts and narratives which diversify the story in many ways. And, culture is exceedingly difficult because the tribe inherited cultures from northern California through western Oregon to southern Washington, some 27 to 48 tribes with 6 different primary languages and numerous cultures. There are commonalities but each culture is unique and deserves individual attention.

The sheer diversity of the tribes is really incredible, difficult to imagine for most people. The southern peoples have a completely different culture than is practiced on the Columbia River. We have river people, prairie people, coastal peoples, and mountain or high elevation tribes all as members of the reservation community. That is a huge number of peoples and landscapes that inspired great diversity in the cultures, and uncommon situation for most reservations in the United States. Then we have the added dimension of the French Canadian people, hired as fur traders who married into the tribes beginning in around 1811 with the Astorians. Later it was quite common for Hudsons Bay employees to have children with native women, or “women of the country.” The native wives would come to live with the French Canadians in their cabins along the Columbia, at French Prairie, or in the Tualatin Valley beginning in around 1828. Still later, in the 1830s, missionaries and Americans began settling in western Oregon, few brought wives with them and so they took native women as their brides.  This was a way to get into the good graces of the tribal chiefs, as in-laws, and to serve the needs of men to have a wife and family.

Initially, the tribal people helped the settlers in innumerable ways, feeding them, helping them build their farms, doing odd labor, being trading partners, and in some cases, true friendships developed. See accounts of the Applegate family for examples of friendship. Settlers began to count on the tribes for help during their agricultural seasons and Native people saw value in learning these new things as well as gaining in trade for their labor, and getting some of the valuable merchandise of the newcomers, guns, knives, metal tools, fabrics, glass beads, cattle and horses, and many other things. In fact, the Upper Umpqua peoples began taking up their own version of land allotments, farming, and raising cattle, horses, etc. The Rogue River Chiefs had small herds of valuable horses they lent out to settlers for a price. Many of the chiefs of the tribes were described in 1855 as having their own houses and herds and were growing foods as they sought to become part of this new powerful white culture that was enveloping them.

The tribes lost all their wealth when they were forced to sign away their lands in a series of treaties. They had to leave everything behind and remove to first a series of temporary reservations, the southern tribes were being moved by 1853 to Table Rock and Umpqua reservations, and the northern tribes were being removed by 1855 to temporary reservations in the valley and on the Columbia River. The temporary reservations were planned for up to four years until Joel Palmer could organize a permanent reservation for all western Oregon Indians. At first, the idea of the Coast Reservation was the primary plan for the removal of all tribes to 100 miles of the intractable coast. It was signed into existence in 1855.  But the Rogue River Indian war and the Columbia river conflicts became too much for Palmer to stand and he had to hatch a new plan- to remove all the tribes to a new more remote temporary reservation, the Yamhill River Indian Reserve. Racism and continued attacks by settlers, volunteer militia and miners on the tribes prompted Palmer to form this new plan and in early 1856 he began moving all western Oregon tribes to the new Yamhill reserve in part, and in part to the remote coastal plain south of the Salmon River within the Coast Reservation, what is now Lincoln County.

By October 1856 some 4,000 natives were removed to the two areas. Many tribes and bands sought to avoid capture and removal, first not wanted to remove, and then, of being afraid of being murdered by the Oregon Volunteers, a well-founded fear based on events that had happened several times to other tribes, notably the Chetco. So, many tribes hid out in the Coast Range in and the ranges in southern Oregon. Over the next nearly-20 years, Indian agents sought to remove all tribal bands to the two permanent reservations in western Oregon, the Grand Ronde made permanent in 1857- from the Yamhill River Reserve- and the Coast Reservation which became the much reduced Siletz Reservation in 1875.

In the first 20 years of the reservations, conditions were very bad. Poverty and lack of resources were the main problems of the tribes on the reservation causing the loss of hundreds of people, from malnutrition, diseases, stress, and violence. Many people tried to escape, and some were successful, leaving and integrating with the new towns in Oregon. They became the town laborers, as they did not have any rights to land and were not U.S. citizens. The natives had to be friendly with the whites to be allowed to live outside of the reservations, or they would be reported to the police and Indian agents and returned to the reservations. Some natives were allowed to go live at local farms as the farm laborers and this worked for some years. But tribal people could not travel off-reservation without a pass from the Indian agents. Citizenship was a thing held above their heads for years to make them all act like good Indians. President U.S. Grant said he would support citizenship for natives who became civilized. This began a resurgence of assimilation policies by the federal government, getting native families to learn to farm and become “productive”, while the church missionaries intensified their efforts to convert Native peoples to Christianity and forced native children to become socialized into Christianity through boarding schools. In the 1870s the Catholic Boarding school was built at Grand Ronde and through this method, Federal authorities forced the tribe for generations to send their girls to live at the school for years, while the boys would come and go as they were valued for their farm labor. Even at Chemawa Indian boarding school, ran as a “secular” school without church oversight, the majority of the instruction was toward Christian lifeways.

In 1924 the Native people were all made citizens by national legislation. But things did not much change at Grand Ronde. The people at the reservation were used to running their own affairs and had already had several generations of assimilation forced upon them. The majority of the people were Catholic and farmers. Their children by this time willingly went to boarding schools and learned trades that they could not get jobs working in at the reservations after leaving school. Many students once graduated chose to leave the reservation to live in a city to get jobs. Those born after 1887 could not even get a land allotment at the reservation as no surplus lands were reserved for future generations. The surplus lands were instead sold.

By the 1930s the population of the reservation had been reduced to about 300-500 people, the rest living elsewhere. Many of the original allotments were sold as being poor-valued lands unsuitable for agriculture. In 1936 the tribe adopted a constitution under the Indian reorganization act and became self-governing under their Business Committee. Later in the 1930s and into the 1950s, the federal government supported the Indian Rehabilitation Act by installing a cannery at Grand Ronde in the new Governance hall. Using the cannery people at the reservation canned all manner of products for sale to local merchants and even took orders from Seattle and San Francisco. The luxury product they produced was Gay Moccasin Jam made from native blackberries.

By 1944 the Federal government was looking for ways to relieve themselves of the burden of the reservations, costing at least 40 million annually. The 10-year-plans were drawn up documenting the assets of the reservation and the social character of the tribes on each reservation. In 1947 the federal government decided to move towards liquidation of the tribes seeing profits to be made from their unexploited natural resources. Klamath especially was targetted for its timber stands and water resources. In 1952 Termination became the national policy towards tribes and Grand Ronde was terminated with 59 other tribes in PL 588 in 1954, to be finalized in 1956. 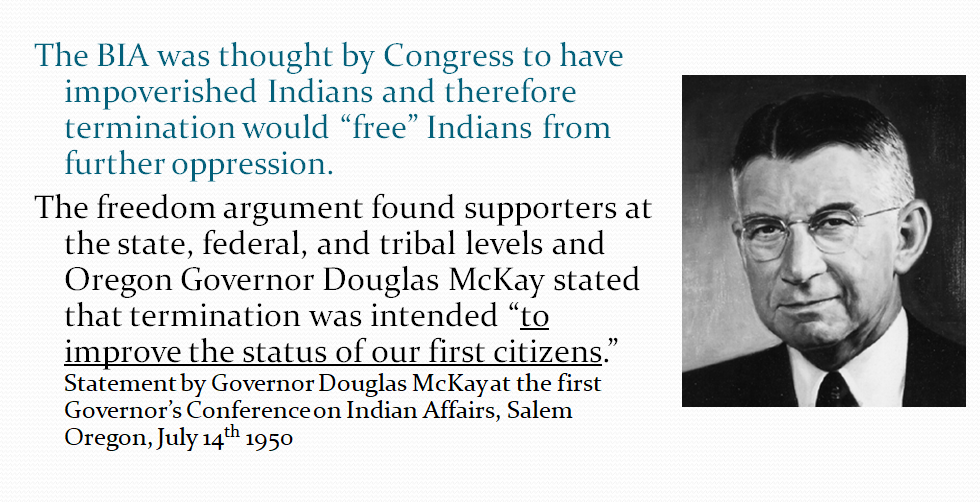 Grand Ronde was terminated for 29 years to be restored in 1983. Tribal elders worked through the 1970s to restore the tribe noting that most tribal members were very poor, and they were numerous effects to the tribes due to loss of culture and language. The tribe was in danger of going extinct, something which would affect 27 to 35 tribes of western Oregon. Oregon politicians agreed to restore the tribe because it was the right thing to do.

We are now in the cultural restoration period of the tribe. Tribal scholars, academic scholars, and tribal elders are working now to help restore the identity and culture of the tribe. The tribe has restored governance and has an economy with logging, land speculation, and a casino. There are restored programs at the tribe but not all members can or choose to take part. There are political conflicts over which people deserve to be tribal members, based on blood quantum or based on the language of the citizenship policies. They are disagreements over whether the tribe should be a bucket of money for tribal members or has a role in helping restore the tribal cultures, languages, and identities of its members. Many people would just like to get their money from the tribe and do not care about the culture at all. It is understandable as for all of their lives and for their recent ancestors at the reservation, they had to make do with nothing or next to nothing, everything was taken from them, when once their people owned millions of acres of land, and so now that the tribe appears to be wealthy they want their piece of that wealth. The federal government spent a good amount of effort to destroy the tribal identity at the tribe and for many people, assimilation was successful. There seems at times little community consciousness of the benefits to everyone with a revitalized culture and restored cultural identities and healing from being colonized people. The tribe is making headway in Chinuk Wawa language, history, traditional ecological knowledge, and canoe culture. It may take several generations to fix what is still colonized at the tribe today.